Of course, this success invites added scrutiny. We are prepared for this. As of this afternoon, we have backed up all the comments to PDF.
— Wedge LIVE! (@WedgeLIVE) March 2, 2015

Furthermore, Nicole Curtis has finally picked an opponent that suits her. A goofball neighborhood blogger with 163 followers on Twitter.
— Wedge LIVE! (@WedgeLIVE) March 2, 2015

Before I leave the podium, I’d just like to say: to all the haters, Healy fans, Nicole’s Facebook friends…
— Wedge LIVE! (@WedgeLIVE) March 2, 2015

Houses are not people. They do not feel pain. I’m happy to see many of them preserved. But you guys need to stop losing your shit over this.
— Wedge LIVE! (@WedgeLIVE) March 2, 2015

But for those of us who aren’t a part of the Rehab Addict subculture, we demand proof. Corruption. Bribes. “Disturbing” emails. Prove it.
— Wedge LIVE! (@WedgeLIVE) March 2, 2015

I invite you to inspect my PDFs, sir. Next question! RT @anton612: @WedgeLIVE I should rephrase that. Why do you slander patriots?
— Wedge LIVE! (@WedgeLIVE) March 2, 2015

Transient, through and through. Proud of it. RT @MrFesser: @WedgeLIVE Are you one of those…renter types?
— Wedge LIVE! (@WedgeLIVE) March 2, 2015

.@MattyLangMSP I aboslutely deny it. I tried a beard once. Didn’t like it. And I’m older than you’d think based on the nonsense I tweet.
— Wedge LIVE! (@WedgeLIVE) March 2, 2015

OK, folks, that’s it. @WedgeLIVE has some more screenshotting to do. Thanks, everyone.
— Wedge LIVE! (@WedgeLIVE) March 2, 2015

It’s usually not reasonable to expect celebrities to be responsible for the actions of their fans, or for anyone to be held responsible for a few crazies in their comment section. But I think the demonization of Lisa Bender is getting out of hand. Seriously.

Nearly 16 days after dropping hints about “disturbing emails” allegedly written by Minneapolis Council Member Andrew Johnson (an unlikely suspect when you consider he is the Council’s foremost advocate for open data, and therefore likeliest to be aware of the public nature of his email correspondence), Nicole Curtis is promoting her new, very mysterious scandal-hashtag #Girard. Details won’t be forthcoming.

What is “Girard”? Curtis’s HGTV colleagues (rivals?) at Renovate to Rent have proposed a new development for 2811 Girard. The plan, which fits within current zoning, was met with enthusiastic support from the neighborhood association. Scandal seems unlikely, but maybe the home improvement icon has a trail of emails up her sleeve.

@NickHannula No we are calling out @lisabendermpls for not being honest & for secretly meeting w developers off the record #girard
— Nicole Curtis (@nicolecurtis) February 26, 2015

@NickHannula no why don’t you ask @lisabendermpls about her meetings off the record regarding #girard ?
— Nicole Curtis (@nicolecurtis) February 26, 2015

@WedgeLIVE I guess I don’t even know what the complaint is this time around. The three houses coming down/being moved?
— Dylan Thomas (@DthomasJournals) February 26, 2015

@AndrewForMpls @lisabendermpls gladly let’s not forget ALL your emails are public information when you are repping as a CM. As well as hers
— Nicole Curtis (@nicolecurtis) February 10, 2015

This weekend, HGTV personality Nicole Curtis renewed her efforts to save 2320 Colfax by encouraging her nationwide fan-base to email the entire Minneapolis City Council. Unfortunately, her far-flung fans have been misinformed by months of error-riddled Facebook rants (seemingly banged out on her iPhone with a hammer). It’s only a slight exaggeration to say most of them believe 2320 Colfax was stolen from Nicole after she inherited it from her great-grandfather T.P. Curtis.

Here’s a sampling of the kinds of things the City Council will find in their inboxes Monday morning, courtesy of Rehab Nation. 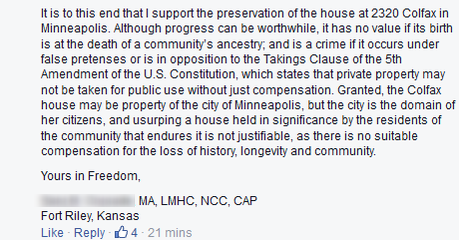 A healthy distrust of government institutions.

Maybe we should knock it all down and start over?

But really though, Minneapolis is kinda lucky.

Do it for the ones with an unbreakable bond to a city they might one day visit.

Give it a drive-by. You’ll love it.

But they’re not all rural types. Check out the civic pride on this city-dweller.

I dunno about President… what about Nicole 2017?

EDIT #2: To delve further into the drama of 2320 Colfax, see our timeline.

EDIT: Some background for those who aren’t closely following Wedge neighborhood drama. Last week, Nicole Curtis had a Facebook freakout, distributed to her 500,000 fans, over the removal of siding on a house located at 2316 Colfax (in preparation for demolition). Nicole is an HGTV personality who remodels homes all over Minneapolis. She’s also the celebrity friend of the Wedge’s collection of anti-density activists (MRRDC, Healy Project, Team Tuthill, etc). She’s been especially critical of a plan to demolish the houses at 2316 and 2320 Colfax to make way for an apartment building. If you have a house vigil, she’ll bring a camera crew. She says things like, “Uptown needs another apartment building like a hole in the head.”

Everyone and their mother was having Fred Sanford-style heart attacks last week over the Wedge’s most notorious homeowner, Mike Crow, doing work (let’s call it “de-hab”) on 2316 Colfax without a weekend permit. It got me thinking that I could make a name for myself, and graduate from fake journalist to nosy neighbor, by taking down a permit scofflaw.

So I headed downtown. After going to three different government buildings–and speaking with every security guard, every sheriff’s deputy, and every no-nonsense older lady behind every information desk–I finally had a clue. A stranger handed me a piece of paper. I made a few phone calls; a source told me that this coded message was actually an address.

I went up to the third floor, where I could hear the distinctive voice of everyone’s favorite fourth-ring suburbanite, City Planner John Smoley, advising people on city planning type stuff. I stepped up to the counter, asked a few questions and gave the nice woman an address. She brought some information up on her screen.

“Isn’t this the lady from that home rehab TV show? Nicole Curtis? You’d think she would know better.” She laughed as she said it. I asked her to print the information for me.

From my limited understanding, the code “DBLE FEE” indicates someone has started work without a permit. For the property pictured above, we have a new garage door, removal of a bearing wall in the basement, and some basement plumbing work.

Another property I checked on was on 25th Ave N, which Nicole features on her website.
At this point, I had seen too much. It was all I could stomach. I had visions of dead renters filling the basements of all of Nicole’s properties from Minneapolis to Detroit. So I gave up and went home. Imagine what a real journalist could find.
A previous version of this post contained images with un-blurred house numbers. I regret the mistake.

Duck in the pool